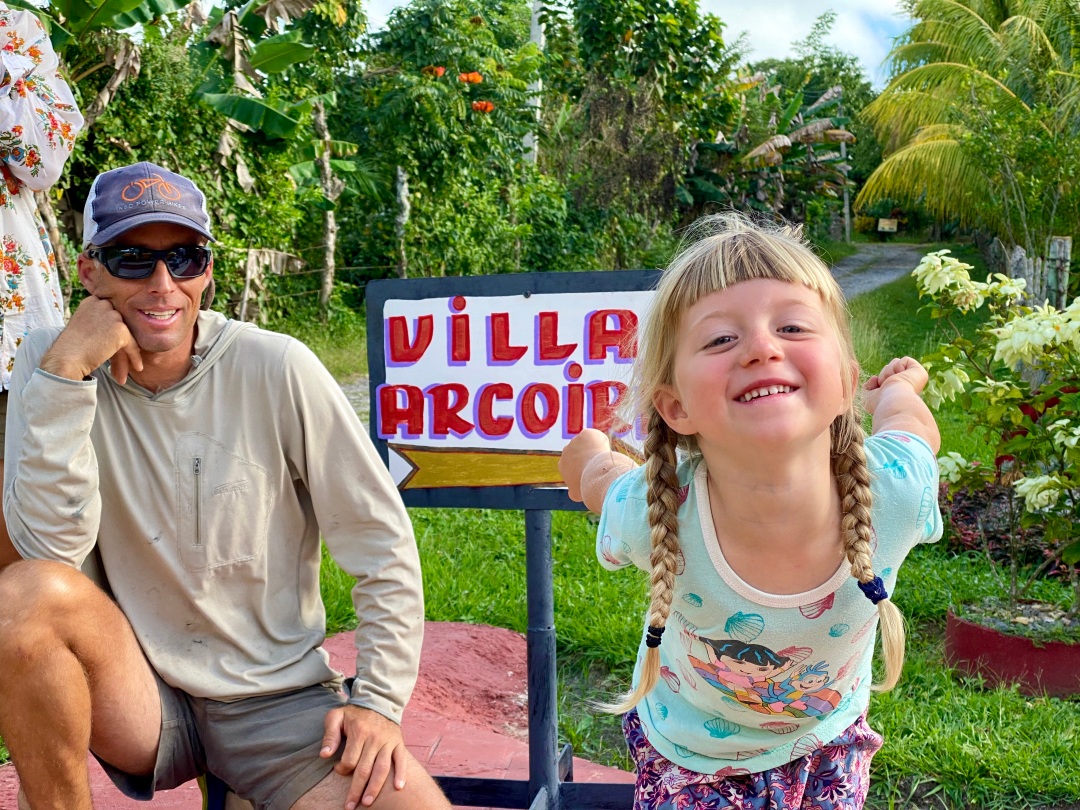 Cycling Cuba challenges are mostly not having access to water or food in the middle of nowhere or even worse, not finding accommodation because you -as a tourist- are not meant to be there -as we learnt on Day 6-. So instead of cycling to Playa Larga we decided to take a Taxi that would cost a little more than the bus, but most importantly it would take Spaghetti lightly unassembled into boxes and our belongings from our place and at the time we wanted.

We said goodbye to the Canadian family and Maria de los Angeles, owner of Villa Arcoiris, for last time. We made it to Playa Larga and spent the afternoon at the beach. Nice colors and everything but still our favorite beach was Cayo Levise. We stayed at a place not even worth mentioning but like any other Casa Particular was clean, had hot water and AC. The owner kept playing different tricks, insisting that on Playa Giron -our next destination- everything was full and that he recommended staying another night at his place. We had that before and the more he insisted and talking about how bad the idea was to continue our trip the less we trusted him. So we have no good recommendations for Playa Larga. That said, we really liked the beach.

We continued assembling Spaghetti and headed towards Playa Giron. We stopped half way through at las Cuevas de los Peces beach. The snorkeling there is an absolutely must. Depth might be 10m so this was not that different to what you could have seen going down diving. The Cueva itself is ok, they kept saying is like a Mexican cenote, so my expectations were like that. We can safely say its a nice place but don’t expect anything close to a cenote.

We met a French couple along the road about our age who was traveling with their family for a year. They had 4 kids. The smallest were twins and they were 8 years old. Each of the six family members had its own bike with flags from many countries -the ones they had cycled so far-. When asked about what their teachers thought about pulling them out of school for a year and travel the world, they responded, “that’s the best thing they can do, take these books and try to teach them every now and then”.

We continued towards Playa Giron stoping every now and then at the amazing beaches we had on our right -again with the wind against us-.

When we arrived there, afraid that everything was full as we were warned, we stopped at the most beautiful house, negotiated the price and got a place for the night.

Lobster and shrimps were part of the dinner they made for us. This amazing couple, he from Quebec and she local, had done a wonderful job building a house for over 5 years. As a builder, while working on construction sites, sourcing material meant for me some annoying 10-15 drive or a 24 to 72 hour long wait when ordering online. They on the other side, had to bring must of their material on each of the trips they did to Canada, that included gutters, caulking, lamps, etc. Lumber was sourced locally and inconsistently from different parts of the island and at different times of the year. It took them 5 years to finish the main renovation.

We had a great conversation with them and for the first time, we saw the “libreta”. That is the little book government gives Cuban citizens to keep track of the food they were given that month. Bread, rice, coffee, brown sugar, white sugar, pork, eggs, matches, and other basic stuff. They received that and distributed locally but for their own consumption they opted for sourcing their kitchen with the products local farmers provided. The rice we had with them had a way superior quality than everything else we had tried in Cuba. The libreta was important for them, not to obtain food, but as the most important -or only- document to proof their address. Needless to say that we played Playa Giron song from Silvio Rodriguez.

We missed having a good picture of their property but here are the owners with us and their house behind.

View all posts by pabvillar