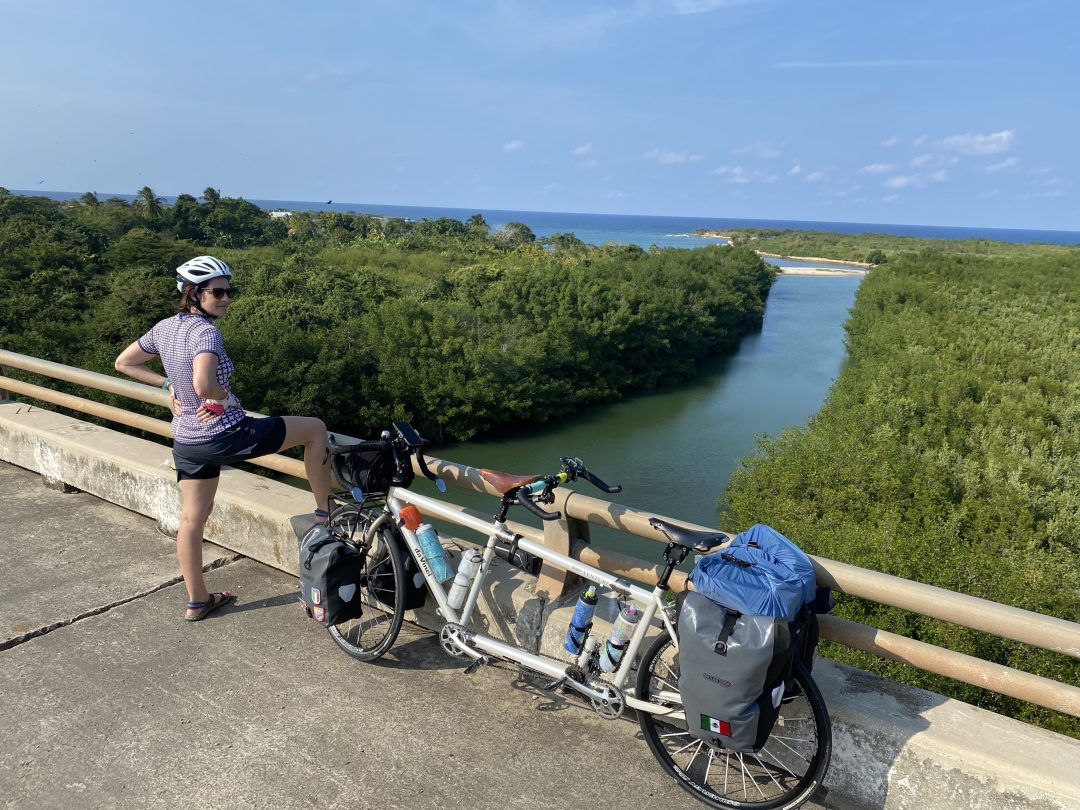 Cycling Cuba is great because of the 50’s traffic. But cycling La Habana in the early morning of January 1st is a luxury. We rode through the remnants of the previous nights celebration that was still alive but much quieter. An older guy yelled “free money” while compacting beer cans and throwing them into a Chinese rice sac which would later be traded. We made our way out and played for last time Guantanamera by Compay Segundo along the Malecon.

We had a few people whom to contact, so we decided to do a quick stop for coffee and continue our 75km ride that was just started. We arrived at the address at the outskirts of La Habana and introduced ourselves.

– “Excuse me, your brother is married to the piano teacher of my brother’s kids in Mexico”.

– “Of course, please come and have coffee”.

Jorge and their family were amazing hosts and we felt we knew them since years. An hour later we kept talking and just when we were ready to leave walking around the garden and swimming pool the terrace table filled up with leftovers from New Year’s Eve. We quickly identified weird objects hard or impossible to find in the country: grapes, Nutella, different kind of cheeses, etc.

Most capitalist countries have different social classes that go hand in hand with their education and purchasing power. That inner compass to guide your talk and measure people does not work here. 9 years of education is obligatory -we heard that they will shift that to 12- and any university program is free. We have crossed 3 levels, those who earn 20usd/month and sort of live with that, those who earn better money through rentals and or receive help from relatives living overseas, and those who have really good income from tourism. You could have all three different classes of people at the same table and have an amazing dinner with diverse conversation due to similar education.

We also came across 3 different mindsets. Those who complain about Cuba, the system and everything that happens to them. Those who prefer not to talk at all about their situation / politics. And those who understand they are in a tough situation but appreciate the little food support, free education, and health system. We often heard, “we’ve watched movies and TV and know that in other countries people would die ill or hungry in the streets”.

We continued along the 5th avenue, forbidden for cyclists, and occasionally found a police waving or giving us thumbs up because they had never seen a double bike before. The idea of sleeping in Cabanas was vanishing so we decided to aim to stay at whatever town we reached by 5pm. We counted the minutes between passing cars in the highway and around every 3 min you would see a car, mostly from the 50’s passing by on the left lane. This was an old movie stage for us.

We made it to Mariel at around 4pm. A town developed around an old cement factory and a 50yo thermoelectric powered by Fuel Oil. Not much environmental regulations apparently for either of them. We thought water would be easy to find but ended up having a pharmacist calling other businesses around to see who had that precious resource in inventory.

Water filter. It would have been definitely a good investment bringing one of those bottles with water filter integrated.

We decided to keep cycling 20km of hilly roads and made it to Cabanas. We came to Villa Luis Montesino and Anabel and had a great dinner and conversation with them. A drunk guy in the plaza took us there but we later found that it was actually the only place to stay for tourists and clearly came up in google maps. They were nice enough to do our laundry and had internet available (1CUC/hr). They were also owners of our next destination Casa Particular in Palma Rubia and secured a good rate.

This was today’s ride:

View all posts by pabvillar